A few unstructured and highly digressive thoughts on Birmingham, the Black Country, Britain, on the Occasion of Birmingham Zine Fest 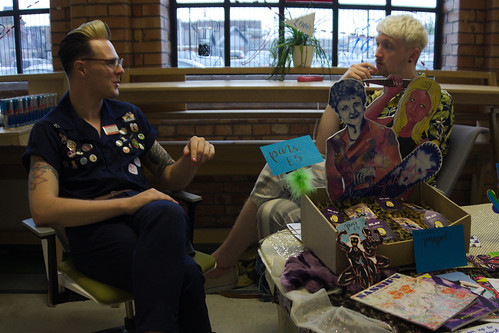 I come from Stourbridge, on the edge of the Black Country and on the commuter belt for Birmingham – trains go regularly and typically the town is the end of the line on a route to Dorridge, apparently an “affluent village in the West Midlands borough of Solihull, England”. I never took to the place. I got out as soon as I could. The more I see, the more I realise, I got out in the wrong direction, to a “Russell Group” (read 'optimally corporate') university in Nottingham. Society in Britain is set up to move “up”. You get out of where you come from and find somewhere “better”, somewhere higher in a socio-economic ladder. You become “productive”. All the people on my corridor were pro fox hunting. University having been a terrible mistake (one of a number of forced errors, I'd say in retrospect, but none the better for that), I got out again. It was 2003. I was stacking shelves with my politics degree, living in a steadily gentrifying area of Nottingham. I had ADHD. Next door was a young girl in her teens who would scream herself hoarse at her young child (example, verbatim: “EAT IT OR I'LL SHOVE YOUR FACE IN IT AND MAKE YOU EAT IT!”). I had moved back to my university town having come home. Back in Stourbridge I'd be greeted in the pub after the march against the Iraq war with “hugged any trees recently”. Prague was a relief. Prague was hard.

Friend in Prague writes. I'd told her I'm down on Prague right now. Loved Ostrava (kind of like a Czech Black Country). Liking some things about Birmingham right now for the first time in years. Unexpected. pic.twitter.com/PY5IzbUybg

I was autistic. I had ADHD. I figured this out slowly. (At first it had looked like manic depression. Perhaps it had been. Perhaps these diagnostic categories don't map as well to human experience as we think and they are merely good enough predictors when made into self-fulfilling prophecies with mainstream medicine.) 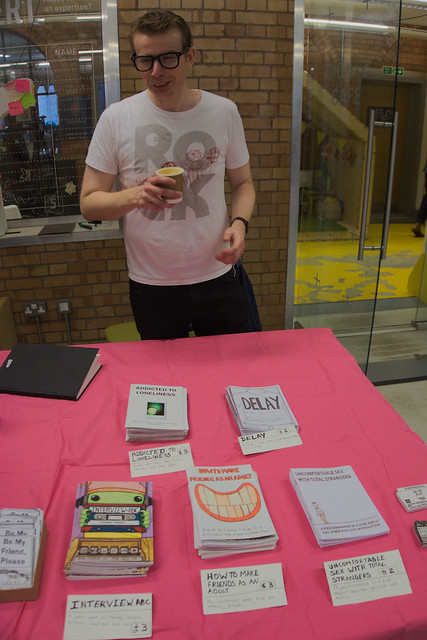 Steven Fraser makes comics, does illustration, theatrical events. He has a number of zines, dealing with topics that immediately reverberate with me. 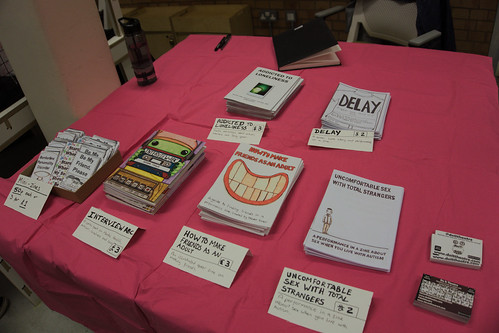 “How To Make Friends as an Adult”, “Uncomfortable Sex With Total Strangers”, loneliness. I pick up the one about making friends and look through it, introducing myself as autistic. One page talks about pretending to like things you hate / which make you feel uncomfortable (I can't recall the wording), and pictures necking back a pint. My memory of all of my years of living in Stourbridge in one image.

Actually, Triple One Five was the first exhibitor I spoke to. They make zines by cutting out text and images from the Metro newspaper. Here, the paper is owned by The Sun. In Prague, the same is owned by the prime minister, along with most of the rest of the press. In both places, such a technique is highly relevent, giving back context to all the bullshit that assails us everyday. Respect. 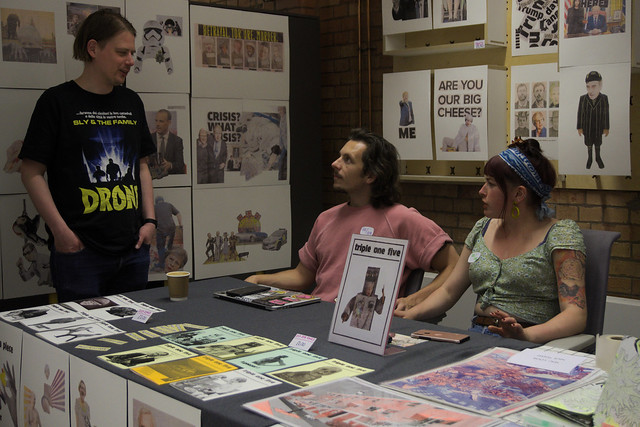 People could be found drawing. I didn't because “I can't draw”. Zines show us this is bullshit and help to erode the preconceptions we have about what art and making art has to be. In fact, I can draw passable well. Not to be an artist as such ie. one who makes their living from drawing and illustration (though few enough do), but to communicate an idea in, say, an English class, or make a visual joke or something. This wasn't the day for that, for me, which is reasonable enough, but I heard conversations around a table where people who said “I can't draw” were challenged, constructively, about why they would think this, and pushed themselves a little. 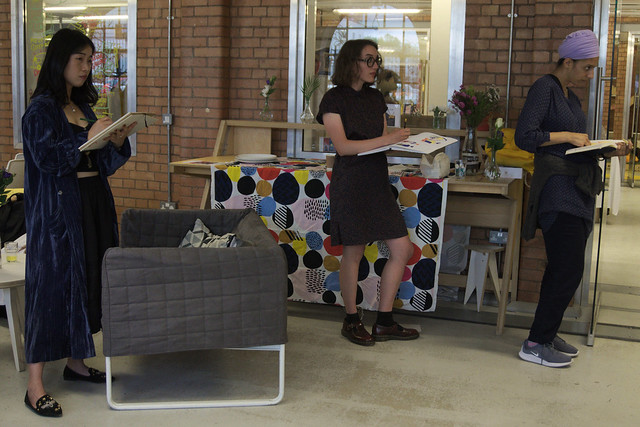 I got chatting to a few folk as I rarely do. One of them was Lizz Lunney who will be launching a book today at ImpactHub. I met her years back in Prague through a friend when we went to a huge comic exhibition. We have chatted occasionally since on Twitter about Brexit, getting an Irish passport, etc. This time I was back from Prague, she was back from Berlin, and we talked about trying to survive as a creative type under late Capitalism / neoliberalism, living abroad.

Zines were always about marginal people, and this feels like what they call a safe space. I tend to set myself to fail by trying to pass as neurotypical and dismissing the impact autism and ADHD has on me (most people around me in Prague do not accept any of this kind of talk and most of my lived experience is something of a taboo with most of the people around me; see the Twitter rant above for more details.) Today I don't do this so much. Only occasionally do I feel embarrassing and unacceptably fringe for this. A number of zines touch on mental health issues: ADHD, autism, depression, social anxiety. I talk about this once or twice. One exhibitor said they had not had the executive function to put a zine together until the last couple of years. I said I was gradually getting there. They said they had started taking stimulant medication a few years ago and that it had helped a lot. I tried them once, I said, and it hadn't been all that. I wondered if I ought to try them again. Nutrition, meanwhile, has done so much.

It's odd being back. Social function is about so much. It is about the individual, of course, but, at the same time, it is about the environment. Stourbridge was wrong for me back in the day. However much it may be the case that I have been hard on it, it was wrong for me; my environment did not give me a chance to thrive. Prague right now, where I am, is much the same. My Czech is good enough that I manage most social situations on a linguistic level, but there are others. It helped me to be away back in 2003 – 2005 when I first went away and found myself on the periphery in Prague because people ascribed my difference to my nationality rather than my being 'weird', but there were fewer Brits among my set back then, and Prague has change since. That and I have moved to a posher area where I really do not fit in. It is odd being back in numerous ways. One, I find that my social skills have improved immeasurably in the last few years. Teaching helps. Nutrition has helped. Getting the right medical advice for me has helped. And now that I come back and find the kind of people, even the kind of community, I feel most comfortable around, I feel that many or most of the impairments and deficits that have affected me over the years are particularly pronounced only because of the kind of environment I have languished for much of my life.

Maybe such people exist in Prague. I don't know them yet. It could be that I am doing the place a disservice. Damn all of this is needed there right now.

I have been working in a co-working space in Digbeth. I said liked it in the sense it had a kind of punky feel to it. One guy I spoke to about these places and their character said he doubts how much they want to “stick it to the man”. I haven't figured out how I feel about these places yet. The people making money and able to work there are doing graphic design and web design, tend to be close to Silicon Valley one way or another, or close to advertising. I am not so keen on any of these areas. Google or Facebook have no reason to fear from these people. I once worked in a co-working space in Prague. It was full of anarchocapitalist types and I felt as marginal and as defective and as much a loser as I have anywhere. We'll see how I feel about it in a few weeks. In an email to the place I chose I made a comparison to another co-working space which felt like a Microsoft-style open source office and seemed to be all about “sucking neoliberal willy”. They didn't reply to that. Perhaps they shouldn't have. Perhaps I don't know how to behave.

Lizz Lunney introduced me to Dan Berry. He talked about how it was working for a university (it wasn't great), and we all seemed to either regret having gone to university or getting involved with them. Lizz said she learned nothing at university and seems to have had similar experiences to myself related to writing to the Student Loan people every year. In any case, one of the things that had worked out well for him was Patreon, which has Lizz spoke up for as well. He spoke about doing a podcast and he has found the experience very positive. He gets a decent amount of money for each episode.

Dan's podcast is called Make it Then Tell Everybody. That seems to sum it up. I am not there yet. I have not tended to believe in myself, and have not always had the exective function to get things finished. When I do then, I have not tended to talk about it, thinking it far too fringe for anybody to care. It's a chicken and egg thing, of course: if you don't have an audience, you don't have the deadlines to get things finished, the motivation to push towards getting something out there. Perhaps getting a co-working space will help me towards this. Certainly getting out among people who are trying to make things, some of whom are successful financially, many of whom are showing how to make things and tell everybody, each in their own way. I'm getting there. It's been quite a journey so far. Not an easy one. I'm starting to figure out how to talk about it.

Thanks to everybody at the zine festival, wherever you are coming from, and whatever it is that makes you fringe to somebody. I may catch up with you later.