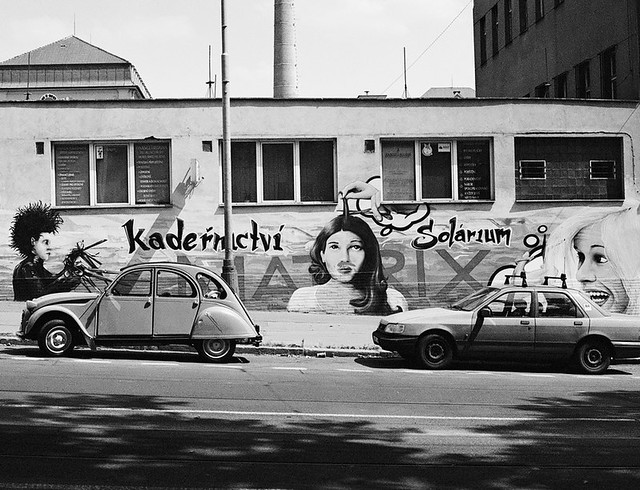 Should I, shouldn’t I?

So this time it’s a longboard. Right now I have one borrowed from Kája, the owner of the flat where I rent a room as an office. I have been out a handful of times trying my hand at the thing. Which is fine, except that I am 42 and haven’t so much as stood on a skateboard since I was, say, 10. I was not the coolest, nor the most coordinated of children. As usual, I can picture a handful of scenes (there’s nothing wrong with my memory except that there is rather too much of it). One, there are several of us stood outside our front door. We have moved out of the working class estate to the suburban end of town, between the former headmaster and the former conservative counsellor or whatever he was and the lads are talking about skateboards in a way I don’t understand. At all. They are talking about brands. Santa Cruz, I’m pretty sure it was, was where it was at. I was glad of my board, went up and down the three, four metres of the gently-sloped path on the garden on it, and must surely have gone down the less gently-sloped passageway up the other end of the avenue, though I guess I must have been sitting down on it, but it would surely have been from Argos… although no (speak, memory!) because I can now remember sitting on it, rocking side to side with it still wrapped in a bin bag in a shop in Birmingham, can remember indeed how mum disappeared for what seemed like an age and might indeed have been well over half an hour as they tried to encourage her to get a store card, and then coming back, perhaps sitting on the thing again, still wrapped in that black bag, as we came back on the train. Any case, these were the eighties, but most people in the sixties didn’t have a clue about all of that sex and drugs and rock ‘n’ roll and all of that and I didn’t know anybody who could skate. Any case, two, trying to make conversation or a joke or whatever it may be with the neighbour - the conservative counsellor - who asks after the skateboard with what I could guess now to be distaste though I wouldn’t have figured it at the time, and telling him the skull pictured on the bottom is the last person who tried to ride it. And three, stood around with my brother’s friends outside my primary school, perhaps after some function, or waiting for reports or whatever they called it, and his coolest mate’s[1] consternation at some lad skateboarding who was able to jump up onto the fence.

I was on a snowboard once. It was on a slope little more than ten, fifteen metres long on the back end of The National Mountain Centre of England and Wales where I had been working doing pot wash and wrapping flapjacks in clingfilm.

I’m surrounded thse days by amateur numerologists - I couldn’t even tell you how many - and apparently this is to be my year. Which ought not to be such a shock since I have known since I was eleven or twelve when I read The Hitchiker’s Guide to the Galaxy that 42 is the answer to life, the universe, and everything. But should I buy a longboard?

The answer is obvious. And yet it’s not. I don’t have a car. I don’t have money in the bank that is not, still, at forty two, one way or another attributable to my parents, who are over seventy, or my girlfriend / fiancee, who doesn’t own the flat I live in but have not been paying for. I have money coming in for translations which have come, so far, through a friend and sometime colleague and then sometime manager, but which - if they are to continue coming in - will have to be through my having put in the time and the effort (and, even less attainably, the judgement and charisma and the much undervalued but nonetheless requisite skill of consistently passing for passably normal) in platforms I consider to be demonstrably bullshit or evil or both, aggressively, mitheringly, superficial at best. I am not yet in the country legally, may soon be so in the address I’m living in, but can’t be overly sure I will invariably be able to call it home; I have committed to buying a new computer… I’m broke. I am always broke. And yet a skateboard seems to me right now one of those things that would give me just a little bit of pleasure: reliable, regular pleasure. And then too it seems something that could even be practical, could open up the city for me after a year of living inside of two appartments. And a good one costs 6,000 crowns. Ten hours of work, though it is in fact more like twenty, or thirty, since all of the time I am not working in sprints, I am getting myself in a position to work in sprints, with - and this is crucial here as elsewhere when we talk about work - few reliable regular pleasures that could put me in a position to be able to work without it constantly wearing me down. Ultimately, I am writing marketing copy, not translating Hrabal’s autobiographical trilogy or the stories of Jan Balabán, and so I need some time off doing stuff that feels like fun, with the kind of people I enjoy being around. And so I will likely talk myself around, and be skint, like I’ve been the rest of my life.. I suppose that’s maybe why it’s a no brainer. I’ll go. I’ll buy it. I’ll buy one I think has some value. I’l spend more than I ought. You get used to being skint. You get used to being insecure. Because to be secure is not possible. Saving that 6,000 won’t have me saving up for a cottage in the mountains, or a camper van, or the kind of motorcycle might give me the sense I might be able to cross a border when they close them down again. Boarding around the city, well that feels like something when even mixing in a tram feels claustrophobically intense.

I bought a slackline for 2,000 crowns two, three, maybe even now four years ago. It’s one of the best things I’ve ever bought. My girlfriend will occasionally send me off with it to the park to wind down. It has worked, reliably, for almost each, or perhaps actually each, of those three, four, five years when I have stopped bouldering and even doing regular sport. I had a bike for a while - it’s currently in a wine cellar in Moravia - and getting around on that was a treat, a regular pleasure, for not quite now each of those five years I’ve had it.

Ok, so I’m 42. But I didn’t do this when I should have. And since I have struggled ever to settle down, I haven’t grown out of it. Better now to look like an idiot for however many people than never do it at all before it’s really too late to even stand on the thing.

Ok, tomorrow. I’ll buy a longboard. If I’m going to be writing marketing copy, I’m going to need a longboard.. And if you’re one of the people reading this to see if you would really want this kind of a person to be writing marketing copy for you, fair dos - if you’re really happy with the bullshit, you need to go elsewhere - but I’ll tell you what I’m not going to do is roll play at being a professional all of my life and own it to a degree that it takes over. If we really must be talking about self-improvement, working on your self, continual self development (how about let’s not), then roll playing at being a professional is not something I find particularly self improving. If I am on one of those idiot virtual beer hall putsch things I have found myself wankered in plenty often enough not to want to go back without some real strong-arming, I’m probably going to be sounding off about how the world is going to shit and look at all the fascists and fuck capitalism and by the way Bohumil Hrabal was no collaborator you fucking morons than delivering a viral TED talk about how automatic translation is disrupting the world of whatever the fuck.

Anyway, so fascism and all that, but I’ve just taken a phone call and have to eat something before I go and meet the missus, her on a kick bike, me on that borrowed longboard which I might ruin as I’m not sure the trucks around about the crack through the board. It’ll be evening, but it’s been hot for a week or so now - it’s thrown me right out of joint - and there was a storm earlier, more or less, so it could be pleasant.