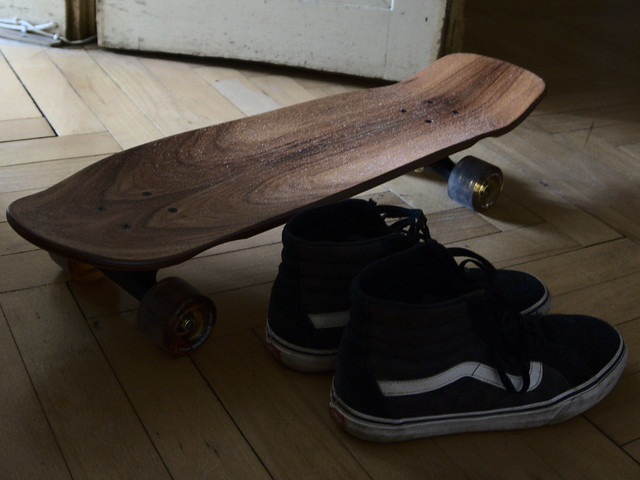 It’ll be no shock to those who either A> read the last post or B> knows me that I bought the longboard, and that, indeed, I bought the more expensive one (designed in California, made in China) with the top flight trucks rather than the Czech one whose wheels would barely spin when I played around with them like I know what I’m doing[1].

Anyway, so I met Woodstock, my girlfriend, in town. We went to the vegan place we used to go to[2] behind the David Černý Kafka thing behind Národní třída. I had ridden to my office through the park, taking the 17 from Výstaviště, and so I took the board I’d borrowed in for a check up telling myself I don’t want to ruin it, and bought another - the one I had been eyeing up the other day when I was having a bit of a mare of it after all of the stress with the foreign police or whatever they are now called.[3]

The board is shorter, is made of quality wood and is designed to show it off - I am a sucker for wood and once travelled around all of North Wales trying to find an acoustic guitar without a cheap-looking plastic equaliser unit making it, for me, aesthetically less than the sum of its parts. I’m yet to discover whether it is much less stable than the longer board I have been using, but the trucks are a little stiffer for turning, which I like, and I am not yet convinced that I will be any more of a liability on it.

I have been using the borrowed board a fair amount by now. Last night was perhaps the longest trip; as I mentioned at the end of the last post, I headed out to meet Woodstock in the evening over by the new footbridge at Troja - that one was made a little more interesting by the pressure of time, and the low light - but I’ve been no slouch and have travelled through the park three mornings now. That’s plenty enough to know that the thing is pretty heavy to carry, and a pain in the ass on trams, especially where one has to run to catch one and manipulate the thing to get a respirator on in short order, which I have had to do now three or four times. I can see why the traditional long longboards (I can’t remember what the various styles are called) are often used not so much as a means of transport but for sport ie. taking it out for an hour or two when the mood strikes. I am not sure I would get so much use out of it that way. And besides, I suppose I decided that I would not be a wuss, talking myself out of it on account of the fact that I am too old[4] or too broke or too uncoordinated to nail it.

I have also in these trips found out that nobody is really watching me waiting to laugh. I still tend not to throw it down and step on it when there are too many people watching, but, damn, after that Covid year there’s plenty of people doing dumber stuff than I am, and a broken arm or whatever is unlikely to change my mind.

Anyway, on with my work so I can afford the thing… Wish me luck, I’ll be travelling home in an hour or so.